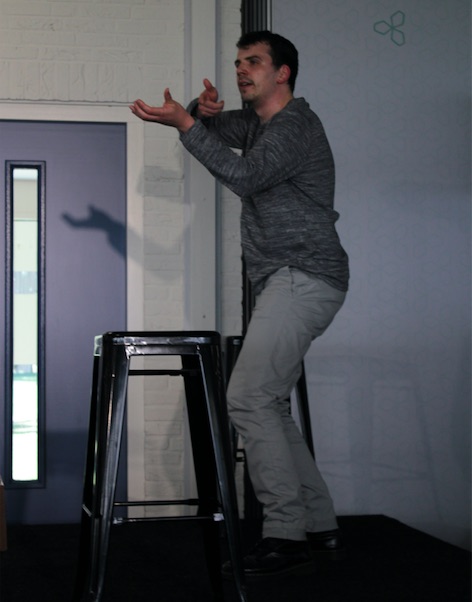 Peace Day – A Play by RidingLights

When you meet Andrew McCracken, a 25-year-old joyful, enthusiastic actor from Ireland, you would not recognize his persona on stage. He performed his play about the impact of World War I at the second day of the conference.

Portraying the role of a shell-shock Irish soldier during and after the war, Andrew is the only actor in the play “Peace Day”, written by Philip Orr. Centering around Northern-Irish soldier Joe, who is demanded to serve his king and country during the First World War, the play is based on real-life stories from war veterans. As the play discovers the impact of war on individuals, their surroundings, and following generations, the audience is confronted with topics such as the glorification of conflict, dehumanization of the enemy, and in particular, post-traumatic stress disorder.

For Andrew, the play is a reminder to times ‘before’ and ‘after’. “Born into a society that has been shaped by violent conflict between religious communities during the 1980s, performing a piece about war makes me think of the possibility for integration between worlds that are divided from one another, like in Ireland. Theatre can be a tool for empathy. Especially the scene about the trenches during Christmas time, in which a German soldier starts to sing carols that can be recognized by the English soldiers. Sometimes out of the trenches something good, such as the Christian gospel, can occur. And this is the first sign of hope.”